It was a busy end to August for our competitors at CSW. Starting off with CSW Pro Fighter Javier Garcia making his pro debut last Thursday 8/25/16 at the OC Fight Club. Javi won via 3rd round TKO.

Jacob Rosales followed the next with his debut on Bellator MMA. In his 6th fight as a Pro Fighter, Jake “Lil Badger” Rosales wins his debut with a unanimous decision and is now 4-2.

On Saturday, our CSW kids, in their second competition together, had an impressive showing. Alyna Anchondo placed first in her division dominating her first opponent with point and finishing the Final with a submission.

On August 26th, Jacob “Lil Badger” Rosales will be making his debut for Bellator MMA. A homegrown fighter out of CSW, under the tutelage of Sensei Erik Paulson and Coach Ben Jones incurred an amateur record of 7-0 and his current pro record of 3-2. Jacob having his first fight at the age of 12, looks to catapult himself into the limelight for bigger matches, and ultimately fight in the UFC. A big contributor as part of the fight team and now current Coach of Thursday night CSW fundamentals, we are all looking forward to his success.

For More Information on his upcoming Bellator Fight: Click Here

CSW Coach and ProFighter Trent Meaux has been having quite the week!  This past Friday, (March 25th) Coach Trent fought in Legacy 52 Fight Promotions and won via TKO in the 2nd round, with a round kick to his opponents liver.  You can find video highlights here:  Legacy 52: Trent Meaux Highlights  On the following Monday, he went back to work, training for his next fight at ProPractice, teaching our CSW kids class, and also participating in our regular night classes.  That night Sensei Erik awarded him with his Blue Belt in BJJ.  Congrats and Thank You Coach Trent!!!! 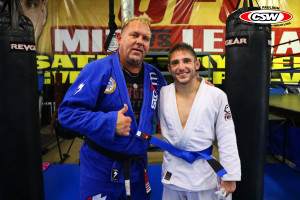 “Before there was the Ultimate Fighting Championship, before anyone even knew the term mixed martial arts in the United States, Japan was a haven for adrift fighters looking to display their craft. Otherwise, anonymity was their companion. MMA was not even considered a sport in the U.S. in the early 1990s, treated more with a dubious cringe as a kind of sports speakeasy where combat nomads could convene before fringe crowds.”

Read the Full Article:  Stories from the Road: Erik Paulson 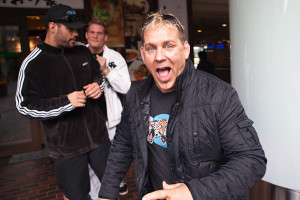